Heroes? No! We're pirates! I love heroes but I don't wanna be one! Do you know what heroes are? Say there is a chunk of meat. Pirates will have a banquet and eat it but heroes will share it with other people. I want all the meat! 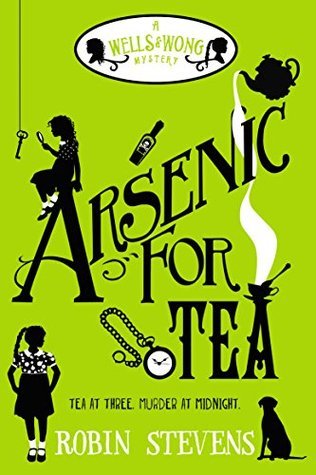 The past is awful, only old people never realize it.

Facts I bet you didn’t know about me:

1. Miss Marple and Dr John Watson bore me to the point of re-reading or retracing the steps that do NOT lead to horrific ends in them old Give Yourself Goosebumps I possess, and I don’t even mind. (This is relevant. Sorta. Not really.)

2. Weddings/marriages/any hint of nuptials provoke an involuntary gag reflex in yours truly, unless we’re talking Tim Burton + Helena Bonham Carter (or break up thereof ;_;), Ellen Degeneres + Portia De Rossi, or NPH + David Burtka. (Irrelevant without a whisper or shadow or fingerprint of a doubt but you just loooove knowing more about me, don’t you?)

3. I’m not sure how to begin this review, or wasn’t, having been on a hiatus for I don’t remember how long. Ergo, the babble. Bear with me.

4. Turns out I like lists. Huh. They’re make for easy-to-follow non-traditional narratives and oftentimes are less work. Cleaner, too.

Reasons to read Arsenic for Tea:

2. You hate Flavia De Luce and the incessant drivel on chemistry and compounds and ugh science. (Really? #Judging_you_hard)

ALL THAT AND MORE IS WITHIN YOUR REACH.

4. It is the story of two girl detectives in the 1940’s England, Daisy Wells and Hazel Wong. They aren’t Sherlockian-smart and they depend a WHOLE LOT on luck, but they are determined little shits (and I say this with the most intense adoration for them) who gnaw bones to their very marrows. (Not literally, that’s my cousin’s piece of cake. Ugh.)

5. The Detective Society grows, a very dastardly man dies within Daisy’s own manor and on her birthday. Somebody in the family has done the deed. Also, fart pillows and weird English treats.

6. GIRLSHIPS AHOY! I heart girl friendships and girl groups so hard, and I bet, you my imaginary audience of the moment who will become manifest when someone on the other side of the Internet chooses to read this particular, prolonged piece, do too.

7. True Detectives, Hazel and Daisy are. Detective-ing doesn’t come naturally to most of us, and staying on the obscure path of impartial judgement and observation and constant vigilance can be hard when you;re not Mad-Eye Moody. Also, when someone in you family might just be the killer. Our ditagonists (is it still that when only one is narrating the story?) struggle, physically and mentally. Lessons from previous murders help and ergo, they are most awesome at it. With the appropriate amount of emotionality.

8. I love this aspect and I’m sure you’ll appreciate it too, Robin Stevens is so adept at it: the book perfectly illustrates, even better than its predecessor, that when you look through those particular pair of lenses, everyone has dark secrets.

We all seem the killer when you expect to see it.

Most of our suspects seem more guilty, not less, the most we discover about them.

9. The mysteries aren’t solved and lived vicariously through Sherlock’s boastful monologues in Watson’s diaries (or whatever). Solutions and revelations aren’t out of reach, or fall down from heaven. All sorts of clues and evidences Daisy and Hazel uncover always lead the reader to the conclusion first, without being overt or obvious about it. It’s all very realistic, for those currently living in 1940 England in a fading manor.

I, personally, never felt out of my depth and believe you me, I am not the kind of knife you’d prefer to butter your bread.

Well, the girls are all awfully clever. We’ve all been 14yo girls at some point in our lives – yes, even you Tony Stark, – and more like than not, we were nowhere near as awesome.

The author just keeps getting better.